The man who choreographed the opening ceremony for London’s 2012 Paralympic Games is coming to Scotland to go dancing with two Glasgow plant companies.

Dealer Scot-JCB and hire firm AB2000 are joining forces for the high-profile opening event of July’s Merchant City Festival in Glasgow. They will work with one of the UK’s leading dance theatre companies on the world premiere of Fragile, a performance combining the movement of dancers and machines.

The show will involve world-class performers from Motionhouse and will be directed by Kevin Finnan, who was choreographer and movement director at the 2012 Paralympics. The event will have echoes of JCB’s ‘Dancing Diggers’ demonstrations that are a huge hit at trade exhibitions around the world. 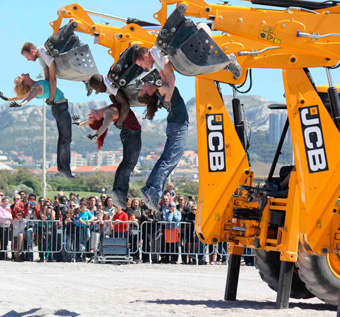 Motionhouse is promoting the event with Conflux, an organisation that works to develop street arts, physical theatre and circus in Scotland. AB2000 became involved when Sandra McGowan, a sales executive with the company, was sounded out by a friend who is a producer at Conflux. The hire company and Scot-JCB quickly agreed to get involved and now the performance is expected to be one of the biggest attractions of the nine-day long festival.

For a taste of what to expect go to: http://www.motionhouse.co.uk/for-promoters/current-productions/machine_dance.shtm

And if the headline to this article sounds familiar click here for some more Glasgow dancing: https://www.youtube.com/watch?v=k45uSUi8AI0