Scotland’s new transport minister has reported that work is “well advanced” on a road contract…that was programmed for completion last spring. 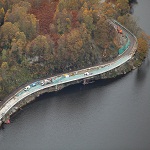 Derek Mackay was speaking on the day that traffic was allowed to use the new Crianlarich bypass on the A82. He commented: “We are also making further significant improvements to the A82, one of Scotland’s key roads, with the £10m Pulpit Rock project on Loch Lomondside already well-advanced with the new structure now clearly visible to road users.”

In fact, the Pulpit Rock scheme was earmarked for completion early this year. Contractor McLaughlin & Harvey has been beset by problems including a very tight site on Loch Lomondside, severe weather and landslides.

The £5m bypass at Crianlarich by R J McLeod (Contractors) included construction of a new 1.3 km stretch of the A82. The scheme allows through traffic to avoid a bottleneck where the A82 and A85 meet and will enable road users to avoid low bridges in Crianlarich. McLeod will remain in Crianlarich over the coming weeks to complete minor works.

Future plans for the A82 include upgrading a 17km stretch between Tarbet and Inverarnan.