…but only on rigids 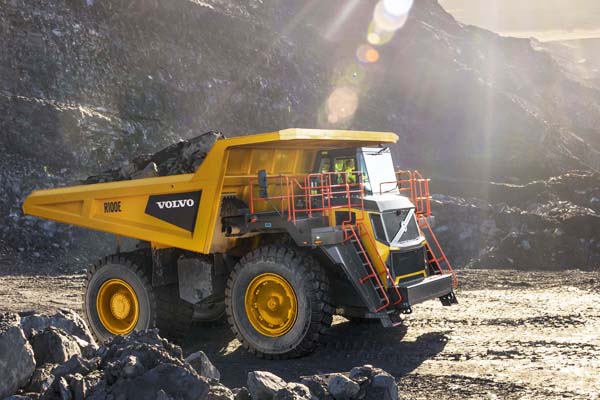 CHANGING COLOUR: The R100E in Volvo black and yellow.

The last Terex-branded rigid truck will come off the Motherwell production line next month as Volvo CE continues to stamp its identity on the famous vehicles.

When the final model has been assembled it will mark the end of a 68-year history of Terex rigids at the Lanarkshire factory and usher in a new era under the Volvo umbrella. But the brand will remain on articulated models.

Four years after acquiring the trucks business the Swedish company has unveiled its first contender, the 95-tonne R100E carrying Volvo’s black and yellow livery rather than the familiar all-white Terex paintwork. It was front-of-stage at last month’s Volvo Days event  in Sweden (click here) and at a presentation to the trade press last week when Paul Douglas, Volvo CE’s vice-president of rigid haulers and managing director of Terex Trucks, confirmed that the first E-series versions of models covering payloads from 41-65 tonnes will be launched next year.

However, he emphasised that the Volvo and Terex branded articulated truck ranges will continue to be marketed separately. When the acquisition was concluded in 2014 the new owner pledged the Terex name would be retained “for the foreseeable future” and while the factory now shows evidence of the Volvo influence (left), the licence to use the Terex brand has just been renewed for a further five years.

Design of the E-Series started almost immediately after the acquisition and around 90% of concept and components of the top-of-the-range model are new. Paul Douglas said the proven design of the haulers had provided “a strong DNA” for Volvo to develop its presence in the rigids market. 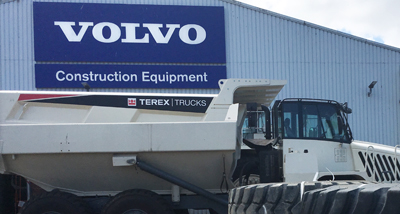 Sign of the times but the articulated models will continue to be marketed separately.