The attachments rental business of Sandhurst Manufacturing has been acquired in a £3.3m deal by Vp, the equipment hire group.

Sandhurst, which has a depot in Fife, has a track record dating from the early 1970s when proprietor Tim Dean set up Sandhurst Manufacturing Company in Kent.

The rental business was formed in 2004 to specialise in hiring out attachments, most recently from a network of five sites across the UK. The acquisition sees it become part of a group that includes UK Forks, Groundforce, Hire Station and Brandon Hire.

Dean, (72), said the company will now concentrate on its retail and manufacturing business. It recently started production of a new handling attachment, the Articulator 5000, and a ‘house’ brand of hydraulic hammers is said to be imminent. 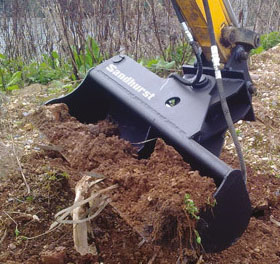 Sandhurst’s Scottish depot at Blairhall was previously owned by J L Plant Services, claimed to be the first Scottish company to hire out hydraulic breakers. It was formed by Robin Geyer who has been involved in plant hire since the early 1960s when his company, Geyer Plant Hire Ltd, employed 70 men and was based in Cairneyhill near Dunfermline.

In the early 1970s Geyer sold the company to Shellabear Price and remained as managing director before leaving to set up J L Plant Services Ltd in 1978.

The business, which was widely known for repairing plant and opencast coal equipment, sold the rock-breaking part of the operation to Sandhurst in 2005 and changed its company name to Geyer Plant Services Ltd.