The 5,600-tonne north approach viaduct of the Queensferry Crossing has been fully launched in what has been called “one of the most technically challenging operations of its type ever performed”.

Latest updates have confirmed the project is on time and due to come in under its fixed budget range of £1.325 to £1.35 billion and is due to open to traffic in December. 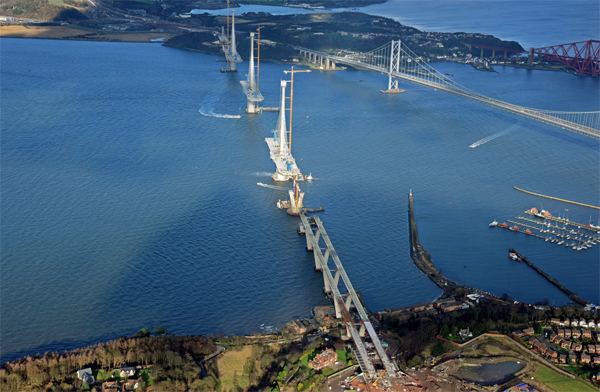 ON TARGET: The bridge is due to open in December.

Describing the latest milestone, Michael Martin, project director for the Forth Crossing Bridge Constructors consortium, said: “This is the kind of work being delivered on a daily basis right across this amazing project. A massive total of 6,300 tonnes of steel and concrete was launched out 230 metres, in itself a significant feat of engineering.

“But what makes this operation really special is the fact that we had to slide the trailing edge of the moving structure down two ramp walls in order to raise the front edge by two metres. This allowed us to pivot the entire structure over the top of one of the two support piers as it moved forwards, resulting in the viaduct structure being at the correct geometry to match the emerging deck coming from the North Tower.”

He added: “This operation was extremely technically challenging. It required the ingenuity of some of the best engineers in the world, to design and build the structure and devise the method of safely and successfully launching it out into position.”

Around 48 miles of cables were used to complete the launch and unlike its south counterpart which was constructed in sections, the north viaduct was fully assembled on site and pushed out over static temporary supports as a single operation. As well as being pushed out, the viaduct was rotated and pivoted upwards making sure that it rolled over the top of the piers.

Only 64 metres now lie between making the connection from the north viaduct to the north deck fan.

Click here for time-lapse and drone footage of the launch.

Want the latest updates? email here with ‘subscribe’ in the subject box