There are hopes of an upturn in UK construction equipment sales despite a big slump in the final quarter of last year.

While the last three months of 2019 continued the trend of quarterly sales declining at increasing rates, industry commentators believe the market could be showing some signs of improvement. Today’s go-ahead for the HS2 rail scheme will reinforce that confidence.

Retail sales of construction and earthmoving equipment reduced by 12.3% in the last quarter of 2019 over the same period in 2018. The significant reduction in the final quarter meant sales for the whole of 2019 were down 6.0% on 2018, reaching just over 32,000 units. 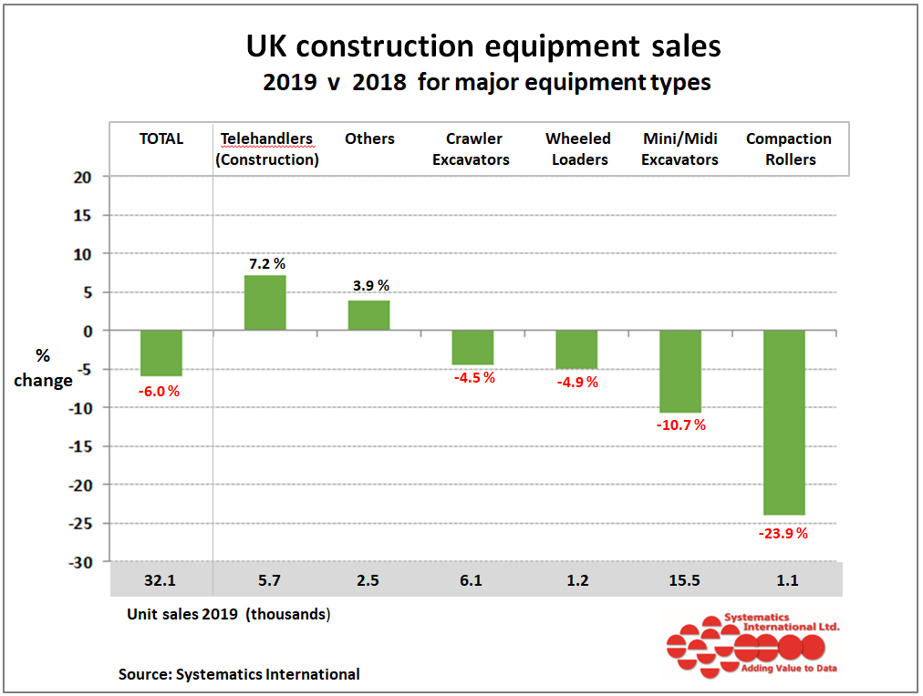 Equipment sales last year were expected to decline after reaching a peak in the previous year but have also been hit by the uncertainty created by Brexit and, in the second half of the year, by further confusion over the future of the HS2 project (approved today by Prime Minister Boris Johnson) and other major infrastructure schemes.

However, Paul Lyons, data analyst at the Construction Equipment Association said that in the early part of the new year, “sentiment within the UK equipment market does seem to be showing some signs of improvement, based on discussions at recent industry events”.

He added: “It is hoped that this is bringing an end to ‘the year of uncertainty’ and that 2020 may see a more stable market.

The reduction during 2019 was felt mainly in the markets for two of the most popular machine types: mini/midi excavators (-10.7%) and crawler excavators over 10 tonnes (-4.5%). There was better news for high volume equipment types such as construction telehandlers, which showed a 7.2% increase in 2019, a result of very strong sales in the middle of the year. Sales of some of the smaller volume equipment types such as skid steer loaders, wheeled excavators and crawler dozers were also strong last year.