JCB has halted production at all its UK manufacturing plants in response to the unprecedented reduction in global demand caused by the coronavirus pandemic.

Work has stopped for the remainder of this week and the whole of next week at its nine plants in Staffordshire, Derbyshire and Wrexham.

CEO Graeme Macdonald said the measures were “absolutely necessary” to protect the business. “JCB is a global exporter and worldwide demand for our products has dropped sharply as customers cancel orders and defer deliveries. This is not just a UK issue, it is worldwide and with countries like France, Spain and Italy going into lock-down, those key markets for construction equipment disappear overnight.” 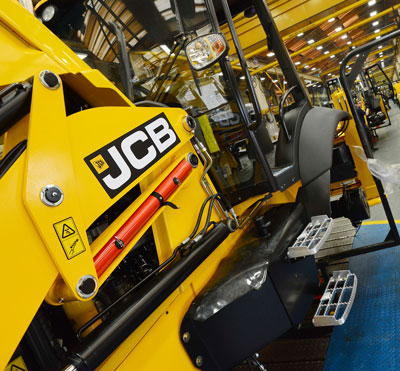 Production lines are at a standstill.

He said the production stoppage would allow the company to re-plan its order book, prioritise products that are definitely required by customers, and ensure parts and components are reassigned to support the production of those products.

Shop floor employees will be paid in full during the stoppage period while office staff will continue to work a 39-hour week, many of them from home. A decision has yet to be taken on the situation from March 30 onwards.

JCB’s plant in Pudong, near Shanghai, ceased production last month as the impact of the pandemic initially took hold. After several weeks of disruption, it is now fully operational again.

It’s the second time JCB production has been affected by the virus. In mid-February all overtime was suspended and a shorter working week introduced for 4,000 workers in response to anticipated component shortages from Chinese suppliers. A basic 39-hour working week resumed on March 5.

Manitou Group has closed its operations in France until March 31. The move affects all French business excluding parts, customer support and some central functions.