SPOA JOINS THE FIGHT   The Scottish Plant Owners Association has added its weight to the campaign to save the subsidy on red diesel, warning that any cuts could lead to an increase in fuel theft, erode already tight margins and stall investment in green technology.

Ahead of Wednesday’s Budget, when new Chancellor Rashi Sunak is widely tipped to cut the rebate (see story below) , SPOA president Mark Anderson told the Chancellor: “Over 50% of the red diesel used in the UK is in the construction sector and as far as I am aware, the plant industry (a key part of this industry), has not been consulted, either via the SPOA or CPA (Construction Plant Hire Association).

“Many construction projects work on wafer-thin margins and [any] unexpected increase in costs will result in costs being cut elsewhere. Furthermore, investment into greener technology, which at this point in time is substantially more expensive than diesel engines, could also suffer. This would work against the intention behind the rebate cut which is supposed to improve and further greener technology.”

He went on: “We are also unsure if you are aware of where greener technology is currently at in the Plant Hire Industry. Our members run machines up to 40 tonnes – currently battery options are only available up to 2.5 tonnes in excavators and 1.5 tonnes in dumpers. It should be noted that when on a construction site these battery machines will need to be charged by a diesel generator.”

Greener technology above 2.5 tonnes is in the form of Stage V diesel engines that have reduced emissions but still require diesel. “It will be some time before batteries or hydrogen can power a 40-tonne machine,” Anderson added.

He said there were fears that any cut to the rebate would eventually see the dye removed from red diesel and thus lead to an increase in fuel theft from construction sites.

Anderson called on the UK Government to re-evaluate its position and seek “a consultative approach” with the plant hire industry.

Plant operators and farmers have reacted with outrage to indications that Chancellor Rishi Sunak could abolish the subsidy on red diesel.

If the move goes ahead in next week’s budget it could mean users of diesel-powered construction plant paying an extra 47p a litre.

The Construction Plant-hire Association (CPA), which represents the owners of 85% of plant used in the UK, has warned of the “profound impact” of withdrawing the subsidy. 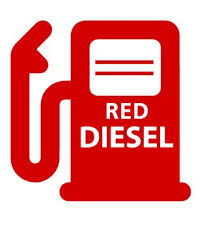 CPA chief executive Kevin Minton has written directly to the Chancellor urging a re-think: “The CPA set out our concerns in the government’s call for evidence on the use of red diesel back in 2018. It is disappointing to see such measures being discussed again.

“Restrictions on the use of red diesel in the construction sector would, unfortunately, have a profound impact for our members and the wider construction industry by raising costs and squeezing already tight profit margins.”

The National Farmers Union also attacked such a proposal. President Minette Batters said the fuel was “absolutely crucial” to the industry and added: “The lower fuel duty on red diesel recognises this fact and, with such uncertainty and rising input costs, it is absolutely essential that the red diesel exemption is maintained.

“While agricultural vehicles have become more efficient, it is impossible for farmers to move away from using red diesel as there are currently no commercially viable alternative fuels.”

Red diesel accounts for about 15% of total diesel sales in the UK and costs the Treasury about £2.4bn a year in revenue.

In 2017 the UK government announced a call for evidence on the use of rebated gas oil (red diesel) “to improve its understanding of how red diesel is used”. Industry commentators believe that, given previous Government interest in the issue, their fears of the subsidy being abolished next week may be justified.