AB2000 has bought a further nine SANY excavators in one of the biggest single orders in Europe for the Chinese equipment.

The deal with Scotland’s largest hirer of operated plant is a further vote of confidence in a brand that has been making steady inroads into UK fleets over the last two years. The package is made up of five SY215C 22-tonners, three SY135C 13.5-tonners and one 35-tonne machine.

Glasgow-based AB200 was one of the first to place an order with UK dealer TDL Equipment, taking a 22-tonner into its fleet in 2015 after an extended demonstration period during which some of its most experienced operators put it through its paces on high-profile jobs including the M8|M73|74 improvements and the Queensferry Crossing. 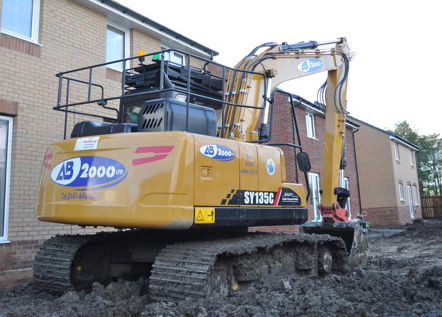 “Reliability is a key consideration for us when purchasing new machines and we have to say our first four SANY excavators have been some of the most reliable in our fleet of over 250 machines,” plant director Bill Marsh told Scottish Plant.  “When it came time to purchase new excavators we had no hesitation to choose SANY as their proven reliability combined with proven components such as Isuzu engines and Kawasaki hydraulics have never let us down.”