Union bosses have accused the Spanish-owned earthmoving company that is taking over load and haul operations at a Scottish superquarry of “sticking two fingers up” at employment regulations.

GMB officials said up to half of the 50 jobs could go at Aggregate Industries’ Glensanda quarry on the west coast when Oban Earth Works takes over from Hargreaves Services at the end of the month. Oban Earth Works is a subsidiary of FERPI Transportes, a Madrid-based earthmoving specialist with operations in Europe, Africa and South America. There are no UK office or contact details listed on its web site.

Gary Cook, GMB Scotland organiser, claimed the remaining workers “can look forward to their existing terms and conditions being ripped up with a new set of working patterns and reduced pay”. 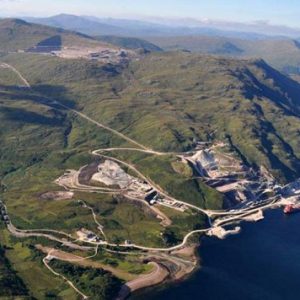 Glensanda is on the Morvern peninsula near Oban.

Some of the employees have worked at the quarry for more than 30 years and Cook warned there could be litigation against the Spanish company to force them to respect the TUPE (Transfer of Undertakings Protection of Employment) Regulations.

All staff have transferred across to the new company. However, GMB said it expected “a long difficult struggle” to establish their rights.

A spokeswoman at Hargreaves said its contract ended in May but the company will remain on site during a hand-over period until the end of this month.

Aggregate Industries commented:“We are switching load and haul provider at our plant in Glensanda and as part of that process there are individuals who will be transferred from our current provider Hargreaves, to our new one (FERPI). Unfortunately, due to increasing production efficiencies on site, there are some employees at risk of being made redundant by FERPI.”

CA Blackwell, the Essex-based bulk earthmoving and plant business, was awarded a four-year ‘load and haul’ contract in 2013. Hargreaves acquired the Blackwell business in January last year for £11.85m.

♦ Last August was the 30th anniversary of the first shipment made from Glensanda. It is the largest granite quarry in Europe with an annual production capacity of more than million tonnes and reserves of 760 million tonnes.

In a response to the Scottish Plant article, Oban Earth Works said it is “highly unlikely” there will be compulsory redundancies at this stage.

In a statement issued by a Birmingham PR firm, director Jon Simarro said: “We are a considerate family business and incredibly conscious of the impact job losses will have on the local community. We are highly committed to doing everything we can to reduce these as far as possible and employ as many local people as we can.

“Although details are still being finalised, it looks highly unlikely that there will be any compulsory redundancies at this stage and we are working hard to redeploy any affected employees to vacancies on Glensanda or any other opportunities within Oban or Scotland-wide. A full employee consultation process is now underway supported by a union representative as requested by GMB members.

“Oban Earth Works appreciates the impact these changes may have on the employees and local community, and commits to supporting every employee throughout the process. We are excited about the five years contract on Glensanda and realise that we can’t do that without experienced motivated staff working with us to make this contract a success.”

The contractor said it can not confirm final numbers while the TUPE process continues but it is likely that 23 or more members of staff will remain from 38 and that it is liaising with Hargreaves on the number of transferring staff.

In addition, it had:

proposed a shift change and an increased overtime rate

agreed that all transferring staff will receive a pay increase of 1.5% on the August 1.