End of the road for West

West of Scotland Heavy Haulage, one of the country’s best-known specialist transport companies, has entered administration and ceased trading with immediate effect.

Along with trading company West of Scotland Storage Ltd it became a casualty of “growing competition, rising costs and unsustainable cash flow problems” according to administrators from FRP Advisory.

The company’s fleet of heavy trucks, trailers and low loaders was one of the biggest in Scotland and the vehicles attracted interest on roads as they transported huge mining, quarrying and civil engineering plant around the UK. More recently, the business had become a leader in transporting turbines to wind farms. 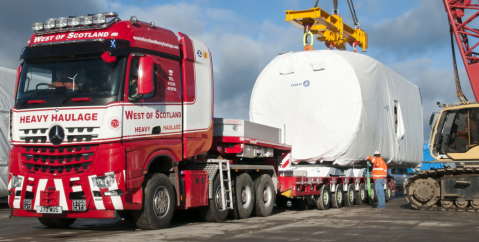 Sub-contractors have been appointed by the administrators to complete three main contracts and two staff have been retained to assist with administration process.

Joint administrator Tom MacLennan said: “West of Scotland Heavy Haulage and associated company were long-standing providers of specialist heavy haulage vehicles and services across Scotland. Unfortunately, the businesses could not overcome severe operational and financial problems, and administration was the only option.”

In 2016 the company won the industry Job of the Year Award for a complicated operation to transport 125-metre turbines to a North Ayrshire wind farm and this year was one of three hauliers that landed the prize for Team of the Year for an operation to deliver concrete beams for the M8/M74 upgrade project.