The section between Craibstone and Parkhill opened this morning after contractor Aberdeen Roads Ltd provided technical assurances for the River Don Crossing, which were required before the final stretch could be made available to road users.

With a £745m budget – it was originally costed at between £295m/£395m – and full opening a year behind schedule, the 36-mile Aberdeen Western Peripheral Route project has been mired in controversy throughout, with concerns over its safety record, the collapse of one of the original consortium contractors and repeated over-runs in the construction programme. 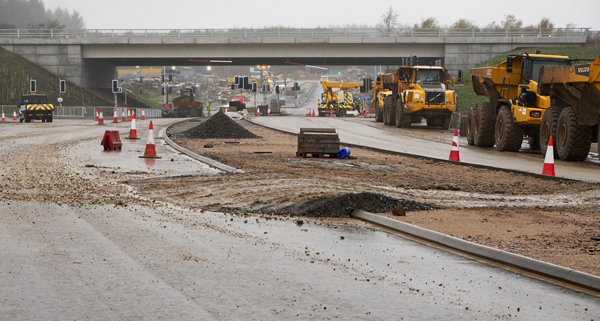 The road was five years in construction.

Such controversy is set to continue.  AWPR was awarded as a £745m fixed price contract but Balfour Beatty and Galliford Try, the two remaining contractors in the consortium, are claiming for additional costs that could push the bill over the £1 billion mark.

Referring to the costs disputes, Matheson said: “They have a claim that they believe they have additional costs associated with this particular project. However, not all claims have merit.

“As it stands at the present moment, the over-all cost of this project remains at the £745m that was set out at the very beginning. My interests are to protect the taxpayers here, to make sure that any additional costs that may be associated with the completion of this road which are the fault of the contractors or errors that they have made are costs that have to be borne by the contractors.”

Three weeks ago, in reference to the Don Crossing issue, Matheson said the Government was not prepared to pick up the tab for mistakes made by construction companies. “No responsible Government could ever saddle the public purse with uncertain costs for an uncertain period of time.”

Douglas Lumsden, Aberdeen City Council co-leader, praised the workers who built the bypass: “We have all seen at first-hand the incredible efforts of the workforce who have made the vision a reality and on behalf of Aberdeen City Council I must thank the thousands who have contributed to what is a landmark project.”