…and I’ll take the slow road 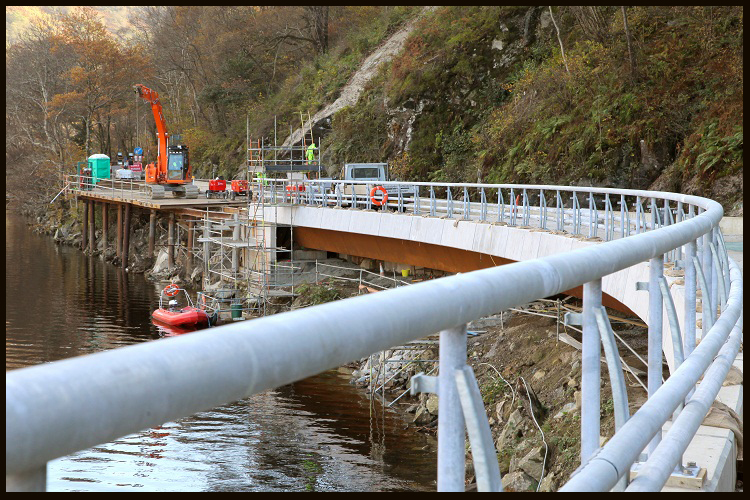 Contractors on the A82 are working in a very narrow ‘corridor’ site with Loch Lomond on one side and the existing road and a steep hillside on the other. (Picture: Transport Scotland)

At the A82 Pulpit Rock improvement scheme on the banks of Loch Lomond work has fallen 35 weeks behind schedule while on the A83 Rest and Be Thankful the Scottish Government has had to commit a further £3m to add to the £9m already spent on tackling landslides and setting up a diversion route.

Responding to a Freedom of Information request from Scottish Plant, a spokeswoman for Transport Scotland commented: “Main contract works commenced on 28 May, 2013 and were scheduled for completion in spring 2014. However, the works are extremely vulnerable to unplanned events and the nature of both the site and the works limits any potential for increased labour/plant and concurrent working.

“Consequently, anything which upsets the sequence of work (such as extreme weather events) tends to result in an impact on overall programme. At the end of December, the project was 35 weeks behind schedule and the road is now expected to be fully opened to two-way traffic in early 2015.”

On the question of who would be liable for additional costs, she said: “Construction contracts of this type make provision for additional costs to be borne by both the employer and the contractor based on risk allocation. In many instances, the net effect of things such as claims, variations, risk allowances, charges and contingencies generally remains uncertain until completion of the works or when the final account is settled.”

“The contractor [McLaughlin & Harvey] has incurred additional costs, some of which are recoverable under the contract but presently the project remains within budget.”

Meanwhile, difficulties continue on the A83 Rest and Be Thankful where work over a number of years has failed to halt the landslides that have led to road closures and delays.

Transport minister Derek Mackay announced the extra £3m at last week’s meeting in Arrochar of the A83 Task Force. The extra cash will be used for landslide mitigation work in Glen Kinglas and at Strone Point corner. He also asked for further work to be carried out into what extra measures could be used to ensure continuity of access to Argyll & Bute. 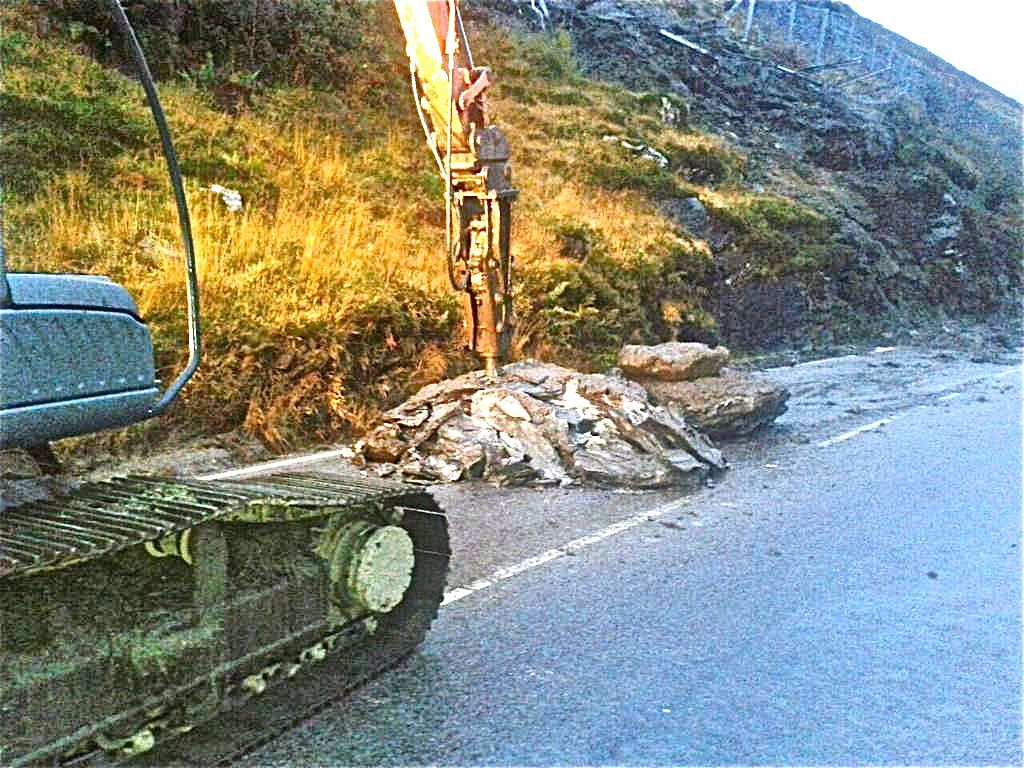 Large boulders being broken up after a landslide at the Rest and Be Thankful.

Mackay said: “The most recent landslide events have shown us that we can keep Argyll open for business. The netting at the Rest and Be Thankful has prevented thousands of tonnes of rubble reaching the road and this has kept disruption to a minimum. The Old Military Road diversion route has shown its worth and brought time savings for the drivers who have made use of it.”

Argyll and Bute Council’s depute leader, Councillor Ellen Morton, was also at the meeting and said later: “Hopefully this additional work will further mitigate against the effects of landslips. However, netting works on the hillside remain a temporary measure. Although the Old Military Road has worked well during recent incidents, carrying thousands of motorists in and out, we still need to explore options which guarantee continuity of access.

“It is only the Scottish Government that can provide the answer. We are committed to doing all that we as a local authority can do, however it is ultimately a matter for the trunk roads authority. We need to find the best practical, affordable solution that we can and I am pleased that Transport Scotland’s engineers will be undertaking further analysis of other options with a view to bringing an update to the next task force meeting.’’